When the seagulls follow the trawler: Cantona at United

For all the stars who've graced the Manchester United shirt, Eric Cantona stands alone as the most iconic and charismatic.

Far from the Best, Cantona rather underperformed in the Champions League, never figured for his country when they won the trophies - and only really turned it on in the Premier League and FA Cup.

But his impact domestically was total. Hughes was committed, Keane courageous, Giggs robotically consistent, Rooney talismanic, Ronaldo mercurial. But it's Eric The King who framed the era of Sir Alex Ferguson with his unique brand of swagger, raffishness et victoire.

We'll never see his like again, on or off the field, encapsulated in eleven seconds by that extraordinary news conference painted a pretty picture on his verbal easel.

"When the seagulls follow the trawler, it is because they think sardines will be thrown into the sea".

Ironic that sublime eloquence should be borne of extreme violence. Cantona's Kung Fu kick at Selhurst Park on racist fan, Matthew Simmons was shocking and he was severely punished for it.

With aloof demeanour, arched back and turned up collars, Cantona steered United to the league the year Kevin Keegan's Newcastle should've won it - then to the Double with a goal of spectacular technique against The Spice Boys of Liverpool, white suits and all.


Two goals spring to mind. The Newcastle-slaying volley at St. James' Park which handed United advantage in the title race and a fantastic chip against Sunderland, where Eric turned to acclaim the adulation from all four corners of Old Trafford by puffing out his shoulders like a tinpot dictator!

Cantona was so disillusioned by his nine-month world football ban that he had to be talked out of quitting for good by Fergie.

The United boss roamed Parisian alleyways on the back of a moped searching for his errant genius. He found him, talked him down and Cantona returned to Old Trafford scoring against Liverpool.

But before United's greatest triumphs - the 1999 treble - Cantona had gone for good, and it was the right decision. In his autobiography, Managing My Life, Sir Alex describes "the thickening process" in Eric's body. The first signs of a middle-age spread. Cantona's motivation had gone. Beach Football and Movie Stardom beckoned.

I watched him a summer later playing Professional Beach Football in Hyde Park. You have to be fit to play on sand - and he really was. There was probably a Championship season left in him. Full, potty crowds would have rolled up to see him - but the stage just wouldn't have been big enough. Cantona quit at the top, a permanent United legend.

Cantona opposed the Malcolm Glazer takeover claiming he'd never return even as manager while the Glazers were in charge. But in July 2008 the Sunday Express reported Cantona's second thoughts. A close friend revealed: “Eric does fancy helping out with coaching at a club like Manchester United. He's been enjoying himself in films and being involved in beach soccer but has always wanted to help produce a team in his style and knows that Sir Alex would encourage him".

Despite his vow that he'd never return while the Glazers remained in control of United it appears his stance has mellowed.

United are too big a behemoth to take a chance on Cantona as United's next manager. But don't write off a return to Old Trafford for a man who has a relationship with his fans like few others.

Nil-Nil, Jeff! A guide to the mystery world of live TV football without pictures!


I've reported football for radio and TV for twenty years and without being too arsey, it's a journalistic skill you hone:


Always keep in mind to broadcast with economy of expression for the remote listener. To do it well takes commitment.

So why does telly use inarticulate, untrained ex-players on Saturdays? No one invited me to play midfield for Arsenal or manage Walsall, so why is 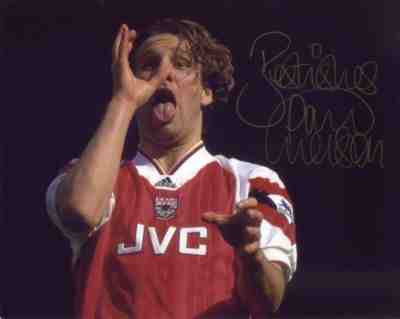 Paul Merson any better equipped to do my job? If you've watched these shows, you'll know the answer.

Players use that strange present tense that can't be used in any other context. So Saturday comes around and Jeff shreeeeks something formulaic like:


..."...they haven't yet, Jeff!", anti-climaxes Merse. "Ashley Young gets it halfway, skins Matty Upson, it falls for Umbongalore who has a crack, Jeff, but Rob Green does well... turns it away for a corner; nil-nil, Jeff".

Of course, ex-player's "media careers"are pigeon-holed into a narrow range of tasks. There's not one ex-pro that could hold that live show together like the exceptionally live Jeff Stelling. Believe me, I did the same show: ITV's Football First. Four hours of non-stop updates, my brain agog with how many since Agogo scored and when Huddersfield last won at home.

And by the way, there's no recorded sighting of a commentator who used to be a player either. You get a guest summariser, that's only so the brilliant and thorough Alan Parry can have a glass of water!

I guess I resent the knock on the studio door by ex-players saying "I'm 36, I'll have some of that", without taking it seriously and doing the yards, the homework, learning the broadcast skills-set. 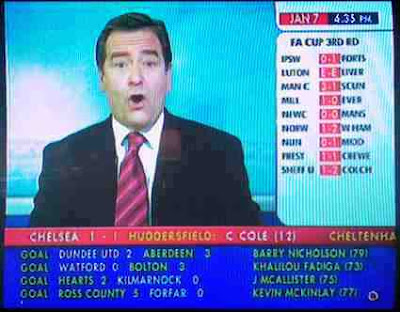 e played the game, we know what we're talking about!", an Andy Gray-style rambling which divides the world up into two categories: "football people" and the rest of humanity.

It's a disdain for his fanbase as though we're watching him to be put right because we couldn't possibly understand having not been a pro.

Almost geraldratneresque, Andy. No wonder, he got the bullet. Pure hubris: pride came before the fall.

My message to ex-players. You're not necessarily blessed with extra knowledge! I bet you couldn't o rganise a live show in a brewery.
Let me tell you, Andy Gray: I've watched football, reported football and played football (with enthusiasm if not technical brilliance) long enough (by the way, I'm actually descended from "football people" too. Are you? Is it hereditary?) and therefore, your qualifications over mine must be tenuous at best.

Having said all of that, there are honourable examples of players who did make the transition:

I always admired Bob Wilson's attempt at on-air orthodoxy. He was functional on 1980 Football Focus, but he did resemble a broadcaster and he deserved his job.

Jimmy Hill too, an intelligent man who genuinely leveraged his "football people" knowledge into opinion and comment when MOTD was a single shot in front of tan wallpaper. But he never let it spill over into the shows raison d'etre.
It took Gary Lineker ages before they turned him into on-air quality; even now he's a one-trick pony. You know that iron statue of Saddam with the outstretched arm they tore down when he was overthrown? well, that's Gary on-air! He's not asked to do complicated - but he's fine.

Nope, they're not listening to me. Andy Townsend's fronting ITV, Mark Bright frankspencer's his way across droney local telly and Garth Crooks frowns through The Red Button like he's talking Iraq - not Stoke.

The trend's here to stay.

So I'm cleaning my boots and I'm going to get myself a professional game. Oh, I'll do the work alright. I'll go to the gym, shoot with my left foot for hours, give and go - and try to perfect the glancing header.
I'll find a game at my level too.

Also on Soccermongery: Carragher's "bottler" talkSPORT moment (podcast) and Massive debts run by the big 4 will see Change We Can Believe In!
by Soccermongery's Jonny Gould on Friday, December 18, 2009 4 comments:

Sven says no to North Korea!

In a first notable act of ethical foreign policy, Sven-Goran Eriksson's rejected the chance to manage North Korea. A wise decision especially as his Korea is in fact going south (boom boom!)

But it's not to appease the Neocons and Hawks up Washington. Sven's decision to reject the Axis of Evil has more to do with his almost OCD approach to job offers. Soccermongery can exclusively reveal he's going through the alphabet accepting them!

Since leaving the FA, Sven's taken on Manchester City, Mexico, Notts County and er... North Korea? (no, it's on the previous page, Sven - but an easy mistake to make!).

Let's face it, Sven's snaffling up contracts coining it in off the back of being world famous in football. Remember the job he nearly accepted after the World Cup, Jamaica? no he left of his own accord!

Sven's got his eye on the money and doesn't give a hoot about where the job is - so long as the chances are he'll get paid!

And the more these old boys throw the dice in the autumn of their careers, the bigger the chance they'll get of grabbing a serious job sooner or later.

Don't believe me? journeyman Luiz Felipe Scolari got Chelsea after errant assignments at whothefcukin'ellaretheyclubs like Al Qadisiya, Criciúma, Grêmio and Júbilo Iwata. It seemed his only qualification was being in charge of teams who knocked England out of major tournaments every other year.

And he got found out!

Sven's a mere twelve months away from a possible return to Manchester City, the hotseat at Portsmouth or maybe Jose's replacement at Inter. North Korea's not good enough? Don't worry Svennis, like the buses another myopic club or country will be a long in fifteen minutes! STOP PRESS: Sweden haven't disappointed us. They've come calling for the old boy. Told you!

Baggies looking for a sponsor - any sponsor! 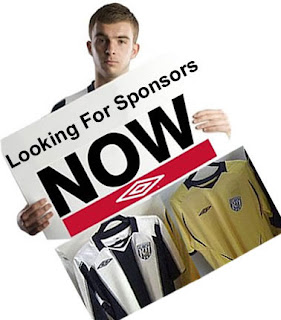 I was interested to read about West Bromwich Albion's efforts to sell their shirt sponsorship on a match by match basis.
Outside the Big 4, the football sponsorship market for club deals has collapsed. Clubs at all levels are finding it harder and harder to maintain even their current deals and price levels - and next to impossible to find new partners ready and willing to pay what was previously seen as the "going rate".
The only sector that seems to be active in this market is Betting Companies, on and off-line, and as I'm sure you all know, they're always looking for bargains, they smell blood in the water and won't pay top dollar.

I'm aware of what some of the clubs, particularly those outside the Premier League have been getting for their shirts and believe me, the figures do not make happy reading.

Aston Villa, Sheffield Wednesday and I think a couple of others made the decision to donate their shirt to local charities - an excellent move but who knows how they would have responded to a good offer from a brand?
As for selling the shirt on a match to match basis, this might offer a decent opportunity on a tactical basis to a brand (like a TV match) as has been the case for non-league teams in the FA Cup (Northwich Victoria and others) but leaving aside the inconvenience and how the fans will react to seeing their shirt as no more than a type of rotating billboard I think it smacks of desperation.

A few years ago, Crystal Palace, who were in terrible financial trouble made a similar offer and my company sponsored their shirts for a one off game at QPR.

It was an excellent buy for us and was seen as providing some extra cash for a club on their uppers but I don't think it does much for a club like Albion, who are perceived as ambitious and challenging for promotion.