Is The Wenger Project reaching its Autumn?

"In Arsene We Trust", proclaims the fan's flag permanently stationed behind the goal at The Emirates. It's partly a tribute to the Esteemed Professor of the Highbury renaissance and partly a prayer from the faithful hoping he can restore the Gunners' falling star.

And in recent years, faith is all Arsenal fans have. Faith that Arsene Wenger can restore the club to prominence in the English game. The gleaming new trophy cabinet in the gleaming new stadium is bare. The truth is with each passing season, the Gunners are slipping further behind 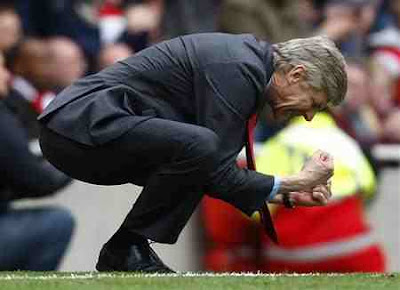 A boardroom who's only joint position seems to be in repelling the takeover bid by Usmanov and Dein, Arsenal's development is as achingly slow as that of Theo Walcott's.

The Emirates stands as a monument to better times. Once they had a settled board with a clear destiny buoyed by years of Doubles and cup success. Sure, the stadium propels the club into the big league and a chance to compete with anyone in the coming decades.

But what of now?

What chance does the Professor have of building a winning side when two of his best players, Hleb and Flamini leave at the drop of a hat, and a third, Adebayor only stays after his Italian move falls through?

Wenger frequently talks of an ethic, a way of doing things which he looks for in his players. But if ultimately the players he propels to stardom end up no more than foreign mercenaries using him as a stepping stone en route to Milan or Barcelona, isn't it time he modified his mindset? Wenger's beliefs work in a winning club but they're left wanting when things get tough.

This doesn't happen at Manchester United. Not only does Sir Alex Ferguson cultivate homegrown youngsters who play for the shirt like few others, he also manages to create that loyalty among the players he brings in.

Until Wenger engenders that dimension into his squad of players, then Arsenal fans will have to make do with being also-rans. His squad rotation will be more about covering for players heading for the exit door!

David Dein once said every manager has a shelf life. It's time for Wenger to show he has the longevity of the other managerial greats. Can Wenger dig deeper to keep up with the Fergies?
by Soccermongery's Jonny Gould on Friday, August 29, 2008 No comments:

When Swans Cry - or Why Raj Persaud Should Present Football Phone-ins!

When Karl Marx declared religion the opium of the masses, he'd clearly not budgeted for football. I mean it wasn't even an opiate when he died in 1883.

I've presented football phone-ins on radio and I'll tell you this... phone-ins are a hive for the unheard and desperate. Some callers should be sponsored by Aspirin.

But I never had to deal with a caller who burst into tears on-air such was his frustration at his club's sorry plight. Swansea City was getting this guy down soooooo much that crying to thousands seemed the only answer. Eat your heart out, Stan Laurel.

I wonder what he thinks years on now Swansea have won a Cup and proudly play in the Premier League!

The presenter did well considering he had no formal training in psychotherapy. Raj Persaud's looking for a job; maybe there's one waiting for him behind the mike in South Wales!
by Soccermongery's Jonny Gould on Tuesday, August 12, 2008 3 comments:

Scolari shows even the big boys walk a tightrope to success

In their hurry-scurry to ship in one of the world's best-known coaches from his high-profile assignment with Portugal, Chelsea forgot to tell Big Phil Scolari that Frank Lampard may not be a part of his squad!

And if you were Peter Kenyon, under pressure from The Big Man to tempt the Brazilian to Stamford Bridge, why would you tell him of the near two-year impasse between the club and Lampard's advisors? Hence, Scolari's comments in his first news conference that the freescoring midfielder would be part of his team and his vice-captain.

Chelsea is after all about the desires of its owner, irrespective of the skills and experience of the coaches and executives below him.

Ditto Manchester United - except for one major difference, the power lies in the manager's office - not at board level. The Glazer's have geared United SO MASSIVELY that the team's on-field success disguises the delicate state of the business itself.

Have Arsenal got much in the locker if Arsene Wenger moved on? well, their board's always been supportive of him and they've shown vision and guile to build the new stadium - but there's no succession plan at all. I mean they can't even be sure of who'll be on their board by the end of this season.

And Liverpool, they've got no money and their new stadium plans are beset with spiralling construction costs and they've not even started building it yet. It's looking unsure at Anfield.

And that's the so-called big four.

All which points to one thing: never has there been a better opportunity for one of the Pretender Clubs behind the big four to challenge for silverware and Champions League qualification.

In these times of the Credit Crunch, increased raw material costs and job losses among the fans, there's a window of opportunity for those clubs with a tighter wage bill, a low-profile supportive board and a continuity of team management, to compete on the pitch in games - and off the pitch in transfers and youth policy.

Step forward Spurs, Everton, Villa and Pompey to not just close the gap to the big 4 but one of them to make the big-time this season!

More competition in the Premier League? - that's got to be a change for good.
by Soccermongery's Jonny Gould on Monday, August 11, 2008 No comments: 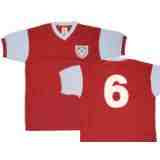 I'm being uncharacteristically coy about predicting this season's title race. You can't look much further than United or Chelsea but even so, there's little skill in it and there's a flip-of-the-coin chance of being wrong!

But one plucky prediction I am willing to make is this: West Ham will have more than a flirtation with relegation: they will follow Stoke and Hull and fall through the Premier League trapdoor.

What makes me so cocksure about this? Two things:

1) They've paid out millions to say goodbye to Freddie Ljungberg: He was a terrible signing anyway. After all, if he'd been useful to Arsene Wenger, the Professor would've kept him at The Emirates.

Ljungberg's not made old bones as a footballer and his injury woes began long ago. The Hammers handling of the past-his-sell-by-date Swede shows a lack of management skill for more than just the last 12 months.

2) Retiring the number 6 shirt: what a cock-eyed miscalculation that is! West Ham proudly announced that to commemorate the 50th anniversary of Sir Bobby Moore's debut, his hallowed shirt would never be seen again. Matthew Upson's moving to the positively unhallowed number 15.

No club with a respect for its own tradition and the motivation that past successes can wrought would do such a thing.

In the very same week, Liverpool unveiled new signing Robbie Keane and boss Rafa Benitez gave him the number 7 shirt. Not a number Keane's been associated with before but the shirt of Anfield legends Dalglish and Keegan. No issues about what's expected of the twenty million pound man then!

United and Liverpool are well-run clubs with a keen eye on who they are. The number 6 shirt at West Ham is the shirt of their undisputed legend.

They should use everything in their armoury to say "yes, you laddie, you can emulate Bobby Moore, here's his shirt number."

They're dowdy, they're miserable and they don't believe. They can't live upto their fans expectations. That's why they're going down.

The pressure's Red Hot at Anfield

The swift and seemingly money-no-object capture of Robbie Keane shows one thing in spades.

At every level of Liverpool Football Club: the board, management and probably senior players too - all realise that time is running out to sustain a realistic annual tilt for the title.

The board knows it: without a bigger stadium and without sufficient funds to finance the proposed new home in Stanley Park, the Reds won't be able to compete with Manchester United and Chelsea for much longer. The fact is the big two have too much muscle.

And Rafa knows it: his squad's in danger of being Premier League also-rans even if they keep finishing third or fourth. Eleven points adrift of the Champions last season was progress, but it's still way short of a baying Kop who accept nothing less.

Most clubs would've dropped the pursuit of Gareth Barry months ago but his capture's all wrapped up with pacifying Steven Gerrard to create a squad they think can win the title NOW. It smells like "It's Now Or Never".

Stanley Park's looking a more dim and distant dream every day. The double whammy of the Credit Crunch and the spiralling cost of building materials means Anfield will be Liverpool's home for the foreseeable future - unless there's a change of ownership. In these troubled times, who exactly is out there?

And Rafa's capture of the Spurs striker is a swift departure from his patient investment in teenage Latinos. He's moved up a couple of gears. Keane's in to unlock Torres, to score goals, to win the Premier League. If they can't do it this year, then when will they mount a serious challenge?

Whenever that is, one thing's guaranteed; it'll be without Gillett, Hicks and Benitez.