Emile Heskey on Aston Villa: relegation fears, Paul Lambert and "money's not the only answer"

Emile Heskey has spoken to me about the fears he shares with Aston Villa fans. 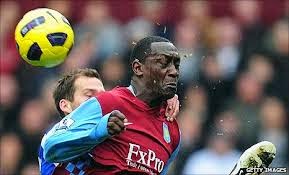 Heskey, who joined Villa from Wigan in the Martin
O'Neill era, scored on his debut at Portsmouth - and maintained his England career while at Villa Park, culminating in a squad place for the 2010 World Cup in South Africa.

Listen as Emile says Villa have the players to pull away from danger, that Paul Lambert's not the only reason Villa find themselves in this predicament - and how money's not the only answer to Villa's problems.

listen to ‘Emile Heskey on #avfc: relegation trouble, Paul Lambert and money's not the only answer’ on audioBoom

by Soccermongery's Jonny Gould on Wednesday, January 21, 2015 No comments:

‘Andy Gray talks to @jonnygould: The alarm bells are ringing for the Claret & Blue: relegation threat, leadership, takeovers and management’

Andy Gray gave me over half-an-hour of his valuable time this morning - on the phone from Qatar, where he now lives working for beINsports with Richard Keys.

Andy's clear and direct views on Aston Villa are underscored by his constant use of "we" and "us" when talking about the club.

He loves Villa where he played in two spells and assisted Big Ron when Villa denied Manchester United a domestic treble when winning the League Cup at Wembley.

He's distressed at their current plight.

He discusses new signing, Carles Gil, the future of Randy Lerner and Paul Lambert, the new CEO Tom Fox and rumours of a Director of Football aiding Lambert.

Andy also pays tribute at the end of the interview to Sir Jack Hayward, Mr. Wolverhampton Wanderers, who passed away, aged 91.

Listen and feedback to me!

by Soccermongery's Jonny Gould on Wednesday, January 14, 2015 No comments: