What an exceptionally intense and intelligent man Martin O'Neill is. I had the pleasure of interviewing him at Aston Villa's team hotel on the Costa del Sol ahead of the Peace Cup, also featuring Real Madrid, Juventus, Lyon and Porto.

Powered by Podbean.com
In our interview, the Villa boss was characteristically cerebral, looking up at me for just a fleeting moment halfway through the eight minutes.

I've great respect for the depth of thought he obviously gives to everything he's charged with achieving. His success at unlikely clubs in unlikely competitions stands as testimony to this.

The news conference organised by visitbirmingham.com, who encourage more people to come to the city for weekend breaks and holidays, was also the launch of the new kit.

Dressed up and raring to go were Brad Friedel, Stiliyan Petrov and Carlos Cuellar.
by Soccermongery's Jonny Gould on Saturday, July 25, 2009 1 comment:

Chelsea need to show they're grown up enough for Ancelotti

So Carlo Ancelotti becomes the latest stellar name from club management to try to Turn The World Blue.

It's a mighty big shout for Ancelotti to have quit Milan to go anywhere: he's a four-time European Cup winner with il Rossoneri, twice as a player and twice as manager. Chelsea need to respect that decision.

Big names come and go with sublime regularity at the Bridge, but even Chelsea must realise that Ancelotti's arrival coupled with John Terry's renewed commitment is a shot in the arm for their title fortunes. Manchester United have won the last three and the Blues are lagging.

For a Superclub, Chelsea consume coaches at an alarming rate: Mourinho, Grant, Sid James and Hiddink? no wonder the Dutchman never considered staying. He's the only coach to leave in a blaze of glory since Roman lavished his multi-millions on the club.

The other Big 3 in England do nothing of the sort; there's no bloodletting in the Manager's Office elsewhere: Fergie at OT, 23 years and counting, Benitez' Anfield tenure looks stronger than ever and Wenger leaving the Emirates would be akin to the Ravens leaving The Tower!

It's time Chelsea stopped it too. Ancelotti created an amazing one-off set-up at Milan. thirty-something world-class players, who continually performed in Europe and domestically. No wonder David Beckham made a beeline to the San Siro, it's THE club for a 34-year-old hard worker.

There's a temptation to lose patience with the manager when the going gets tough at Stamford Bridge. This time the board needs patience with Ancelotti, who's a Project Manager in the class of Sir Alex Ferguson.

Chelsea should stop measuring themselves against the teams above them, and believe that with Ancelotti, the right man for the job, that he will bring the trophies home. 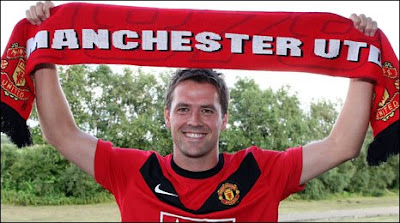 All the signs are there... we're heading for a sharp correction in what big clubs are prepared to pay for top talent.

That might seem an odd thing to say at a time of screaming tabloid headlines.

The world record transfer fee has been smashed twice this summer: Kaka's £56million and then £80million for Cristiano Ronaldo to both join Real Madrid obliterated the £47m which took Zizou from Juventus, also to the Bernabeu.

Carlos Tevez is off to Manchester City for over £25million.

And the action won't stop there: Bayern Munich are holding out for over £60million for their French midfield star, Franck Ribéry.

It's such a huge bounty that only three clubs can afford him. Freespending Real plus Manchester United and Chelsea. But Bayern's board know: If not now, when? the time is ripe for a financial killing at the expense of the world's biggest clubs.

Ahead of a crash, every market throughout time reacts in the same way; an intense inflationary bubble followed by interminable financial heartache. The Western World's property and London's Art Market to name but two.

And the same question always seems to be asked in the months leading upto disaster: "Is the Art/Property/Transfer Market recession proof?"

And the answer is always, "Emphatically, NO!"

I'm willing to make a prediction that Cristiano Ronaldo's transfer fee will be the high bar for a decade.

Sir Alex Ferguson remarked in a recent news conference just how maddening prices have become. Aside from being an accessory to creating the new excitement, he claims he's putting the shutters up as far as buying is concerned this close-season.

In the US, it's basketball's close-season and all the talk surrounds lower wages and fees to reflect economic reality.

If revenues from TV, the Champions League, gate receipts and merchandise start falling (some of those are more volatile than others) then the transfer market, which is the most volatile confidence indicator of all - will crash and burn. It happened in 1981.

You read it here first.