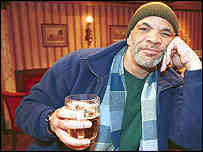 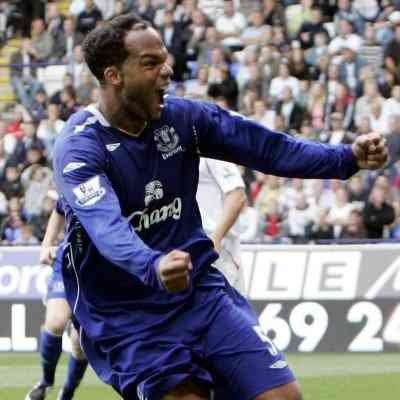 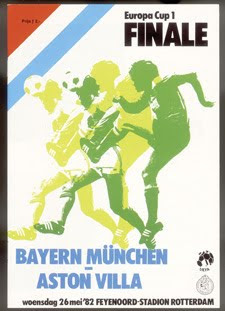 Can Liverpool halt horrible start? Can Villa reach for the Big 4? 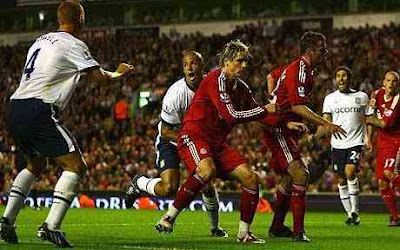 I'm sure you'll forgive me the self indulgence but watching my team, Aston Villa thrice bulge the Anfield onion bag made me squeal like a pig in shit!
Repelling an explosive Liverpool start, Villa pitched up with the perfect away performance, knocking the wind out of Liverpool's sails by taking their three chances at just the right times.
The Reds, unbeaten at Anfield in 31 successive matches, have now lost as many times in their opening three fixtures this season as they did throughout the whole of last.
As

for Villa, this is a huge fillip after a surprise opening day defeat to Wigan and a similarly low-key loss in Vienna. There's a lot of quality near the top of the Premier League and Villa have asserted their place among the big boys emphatically.
Me? I'm off out to celebrate Villa's first win at Anfield in eight years: I'm popping down the disco and in true Merseyside-style, I'm going to punch the DJ in the gob. Hope he's playing some Phil Collins! Su-ssu-ssu-sudio!
Soccermongery's all about your feedback, so write away, right away!
by Soccermongery's Jonny Gould on Monday, August 24, 2009 3 comments:

Is the recession creating a more level playing field?

According to his boss Owen Coyle, Robbie Blake's famous for hitting crisp volleys. Before last night, his reputation for foot-to-eye co-ordination didn't extend much beyond Nelson. It does now! 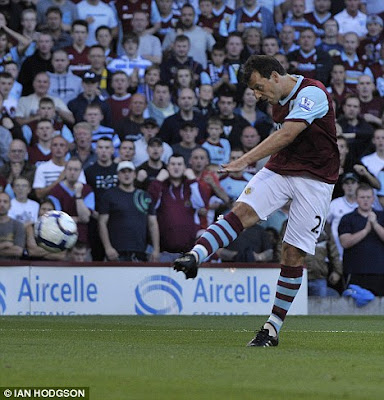 But does it raise questions about the top-flight? In a flegeling season, we've already seen Wigan beat Villa then lose at home to Wolves, Liverpool beaten at Spurs and Hull and Birmingham giving Chelsea and Manchester United sturdy opposition.

Are these merely surprise early-season scorelines and performances or are we to read something into them?
Is the Premier League becoming more competitive because of the economic climate - or will the resolve of lesser clubs be broken come October?
Will the big four order be broken by Spurs, City or Villa?
It does of course come down to the size of the squad at your disposal, and United have started slowly before. You sense Arsene Wenger's control of his multi-national youths will yield an exciting season with the highs and lows you'd expect of an up and coming squad.
But ... I wonder if the lack of transfer activity will give some of the West Hams, Fulhams and Blackburns of the Premier League a mental boost to think "hey, maybe we can challenge higher up than we thought!"
Hear Steven Caldwell's thoughts after the game.
Soccermongery's all about your feedback, so write away, right away!
by Soccermongery's Jonny Gould on Thursday, August 20, 2009 No comments:

Does Steven Gerrard have a screw loose?

Am I alone in thinking this? I don't think so watching his wild celebrations after scoring at Spurs last weekend. It was a beautifully taken spot kick, but then the Reds hero lashed the ball at the crowd with all his might. 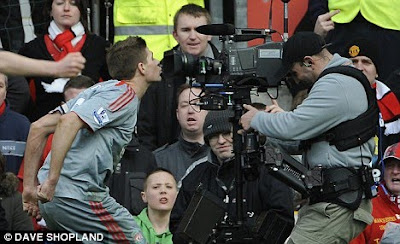 Instead, it shuddered off the woodwork as he ran at the White Hart Lane faithful to gloat.

This is last season as Liverpool thumped Manchester United 4-1 in their own backyard. It's the famous kiss into the Sky Sports camera from the reverse angle (that's the term where football meets geometry).
Recall also Liverpool's emphatic 5-1 trouncing of Newcastle. His celebration struck me as slightly unhinged then. What happened later that night? He popped out for a quiet drink and punched the DJ in the gob.
As the old joke goes, "What do you call a Scouser in a suit? The a 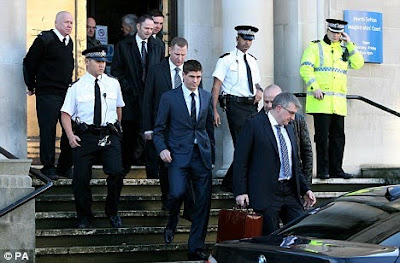 ccused!"
Gerrard will have to take a lot of abuse this season as any top player from opposition home ends does.
But especially now, as he demonstrated an achilles heel with events in Southpaw... er, I mean Southport.

I sense the temperature on the field of play is higher than it was. The financial pressure on players seems to have grabbed a hold of the mood. Have you noticed how there's more after match hugging between victorious managers and their coaches and players? The sense of relief at the end of a game is palpable. It doesn't look as much fun for the players anymore.
It's upto Gerrard to keep a lid on his feelings and let his football do the talking. Just like his England teammates, Wayne Rooney and David Beckham!
Soccermongery's all about your feedback, so write away, right away!
Other Steven Gerrard and Liverpool stories
by Soccermongery's Jonny Gould on Monday, August 17, 2009 5 comments:

Who will win the Premier League? United, Chelsea, Sky Sports or ESPN? 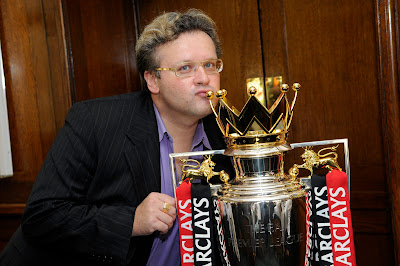 be kissing the hallowed trophy now but who's lips will be puckering up to the Premier League crown next May? Rio Ferdinand? Steven Gerrard? John Terry?... Richard Dunne?

And as ESPN enters the UK's TV market, will their arrival provide Sky Sports with food for thought?


Across the land, hopes are raised for a title tilt, Europa League qualification or a successful fight to avoid the drop, depending on which of the twenty clubs you're behind.

It's a reality of the modern era that every club calibrates its hopes according to revenue forecasts. The Premier League is divided into three, so newly-promoted Burnley aren't about to repeat the achievements of Nottingham Forest's extraordinary Championship victory in their debut season, however adept Owen Coyle appears to be in his top-flight bow.

But Manchester United will attempt something which remains the stuff of fable in 120 years of league football - by retaining the title for a fourth successive year.

Just as with Huddersfield, Arsenal, Liverpool and United of the early noughties - they fall beyond the hat-trick hurdle.

Sir Alex Ferguson is no lagger but summer events have subsumed even his pro-active plans. United's great side is disassembling. Cristiano Ronaldo's realised his boyhood dreams and the itinerant Carlos Tevez has packed his work ethic in a bag bound for Manc

hester City. Fergie's not been quick enough to plug those holes in the face of stiff competition.

No, the trophy will be housed in a new cabinet from next summer - and look no further than the air-conditioned vaults of Stamford Bridge or Anfield for where you'll find it.

As Ray Stubbs told me in the attached interview, nothing will concentrate Anfield minds more than United drawing level with them at eighteen-all in league titles (and that's a fact!) The most successful English club in history are being caught by the Fergie Fablemaker - and it hurts.

But it's within Rafa Benitez's gift to nose ahead once more. The Reds came close to claiming last season - but were let down by a series of unlikely goalless home draws.

Xabi Alonso's defection to Madrid is a blow but the collective resolve of the remaining squad is too big for that to have a lasting effect.

For all of Alonso's contributions, his effect on the Anfield dressing room was negative. He and Rafa didn't get on. Any form of disquiet is a hindrance to a winning team.

But for me, it's Chelsea's season.

It's been a good summer for the Blues. FA Cup glory was followed by Carlo Ancelotti's recruitment as coach, then John Terry confirmed he was staying put after a lairy flirtation with Manchester City. His decision is significant for if he'd left, it would have been akin to the ravens leaving the Tower of London. Surely Lampard and Drogba would have followed him out the exit door in doublequick time - now emphatically off the agenda, Chelsea look tooled up.

I've not mentioned Arsenal yet. In fact, no one is in the same breath as potential champions. The truth is their an unknown commodity. A young side on the edge of maturity. The question is, can they step upto the plate and launch a realistic challenge?

Underestimate Arsene Wenger and his troops at your peril. They have a habit of getting the bit between their teeth and going on long unbeaten runs. Trouble is no one knows if Fabregas, van Persie, Arshavin, Wilshere and Walcott have a new maturity or a soft underbelly - one thing is for sure:

Reports of their demise as a top four club are overstated. The Gunners are too strong to be consumed by the marauding chasers of Everton, Aston Villa and Manchester City. Pretenders to the Champions League those three will remain. Arsenal will prevail as one of the big four, and who really knows what they're capable of?

It's also a big season on the silver screen. Sky Sports now have meaningful competition as ESPN become new entrants into the UK's Premier League market.

But new kids on the block they certainly aren't: the Disney-backed titan runs over forty channels worldwide and they've invested a million pounds a game in securing 46 live and exclusive games this season. It all starts with Everton v Arsenal on August 15th and I caught up with Ray Stubbs, who after twenty years with the BBC will front their big games.

I never become tired of the Premier League!