One of the advantages of holidaying abroad is having less access to English newspapers. It's wonderful not to be assailed by Wapping's slavish, mind numbing Premier League obsession.

unfortunately I'm in Marbella and The Sun's printed on the Costa del Sol everyday. So I managed to get hold of a great pile of papers this morning. I read a self-justifying apology-cum-critique of Rafa Benitez by that deeply misunderstood petal Jermaine Pennant, followed by a stream of Sunday broadsheet pieces all in typeface normally reserved for earthquakes, declarations of war and X Factor results.

With four defeats on the hoof, they microscopically analysed Rafa's transfers over the past four years and the problems of zonal marking. Surely his demise was imminent?

Fast forward to Monday's editions and after a 2-nil win over a comatose Manchester United, Rafa's suddenly the hero again, the tactical genius in full control as their title challenge regains impetus.

As a long suffering Brentford fan I've suffered Martin Allen's reign as manager, a period of great highs and even greater lows as he lived up or maybe better, down, to his (hated) Mad Dog mantle.

Allen's hardly the voice of reason, yet he often said you should neither break open the champagne after a win nor pop the pills after defeat. Instead, keep a sense of proportion.

If somebody like Martin Allen is able to see the wood for the trees why then can't the pundits? They've led us all on a roller coaster ride over the past week.

by Soccermongery's Jonny Gould on Friday, October 30, 2009 No comments: 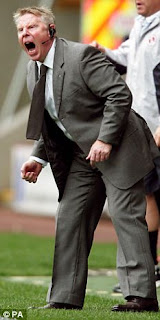 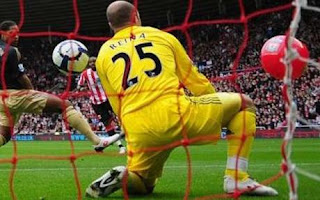 The chants of "Beach Ball for England" are deafening! And who can blame the fans - after all, the Rotund Hitman's scored more goals than Emile Heskey this term!

But Soccermongery's got a longer term memory than that. The precedent for a big, red, round, Liverpool-branded object in England colours has already been set.

He's fat, he's round, he bounces round the ground, Sammy Lee!, Sammy Lee!!

It's nice to know England's got strength in depth just a few months before the World Cup Finals!

Keano: from hottest prospect to journeyman inside twelve months

Roy Keane's Ipswich Town stare up at the rest after yet another defeat, 2-1 at Barnsley.

Rock bottom of the Championship: five points from safety, no league wins eleven games into the season, the board at Portman Road's jittery. A statement offering Keane their full support must be being prepared. The fans of this once-proud club will wonder if the days of Sir Alf Ramsey, Bobby Robson, Arnold Muhren and the Premier League will ever return.

Can we believe this is a team run by Keane? the fearless Irish skipper who seemingly took to management like a duck to water? the selfless Manchester United talisman who steered Sunderland from twenty-third place to the Championship earning promotion to the Premier League? the maturing realist who harnessed his big reputation and experience to attract good players to the Stadium of Light?

What's happened to Keane? the hottest managerial prospect - to Championship journeyman inside twelve months. And we thought the demise of Leeds United was fast.

Clues to his downfall are in the tabloid headlines of yesteryear. To my mind, his walkout as Black Cats boss was akin to Kevin Keegan's tantrum-sponsored resignations. Keano quit because he was in a bad mood for a fortnight.

Describing a narrow victory League Cup victory over Northampton as one of his "worst and longest nights", branding the FIFA Vice-President Jack Warner "a clown" in a row over Dwight Yorke's withdrawal from the Trinidad & Tobago squad and rambling about his future in a post-match interview at Bolton, Keane walked out on his players leaving the club in the relegation zone.

Ipswich would have gone into this appointment with their eyes open - but they only thought of the upside. He's a big name, with a fine playing pedigree, a decent start to his managerial record at the Stadium of Light, a pupil of Brian Clough and Sir Alex Ferguson with an absolute no-compromise attitude to winning.

But he's also the Alfe-Inge Haaland career-ender, the Mick McCarthy disrespector and a man who gets out of the kitchen when he can't stand the heat.

Even fifteen months ago, Keane was talked of as a future Manchester United boss. Not now. When asked, Sir Alex Ferguson's evasive comments about Keane's managerial prospects were withering.

"Young managers come along and people say this one will be England manager or boss of this club, but two years later they're not there. It's not an easy environment to come into, I wouldn't forecast anything."

Keane's greatest moment came in a courageous semi-final appearance in the Champions League at Juventus in 1999. Knowing he was suspended for the Final, he still stood like a man mountain against the Turin side and scored a vital goal to earn United's place in the Final. Maybe, just maybe, his time will come again.

This won't be his last job in the game and indeed if the circumstances are right, you couldn't write Keano off from winning a piece of silverware with a compliant board and adoring fans as a backdrop.

But he'd make a better Shock Jock or Studio Pundit. Keane's managerial career is definitely on a yellow.