Why do football's authorities dance around John Terry?

UEFA have confirmed they WILL allow John Terry the privilege of lifting the Champions League trophy as club captain - if they beat Bayern Munich next month. Meanwhile, the Football Association have cancelled the traditional pre-match handshake as Chelsea face QPR because it would pit Terry against Anton Ferdinand, the man he's accused of racially abusing. I'm asking when will football's authorities wise up to the fact they're accommodating, rather than punishing Terry?

listen to ‘Why do football authorities dance around John Terry?’ on Audioboo

There's no substitute for experience

The old boys are certainly ruling the roost as this season's trophies are dished out.

It's been a season of two halves for Chelsea. First up, Roman Abramovich got behind a coach barely older than Frank Lampard before getting back to what he knew. The talent to win cups was already at his disposal in the dressing room - not on the drawing board.

33-year-old Andre Villas-Boas was told to grasp the thirtysomething nettle and build a new team.

But it turned out more revolution than evolution as the The Unspecial One was fired - and though Abramovich has firmly kicked the rebuilding can into the close-season for a squad overhaul, Chelsea suddenly find themselves in the FA Cup Final and at an advantage over mighty Barcelona in their Champions League semi-final.

And they couldn't have made it this far without Plan B: caretaker Roberto Di Matteo and his insistence on letting experience run games.

﻿﻿
﻿﻿Didier Drogba and Frank Lampard have played with renewed freedom since Villa-Boas' departure, and granted licence to do so by Di Matteo. The Italian said as much after the Champions League semi-final first-leg win over Barcelona: experience won through. ﻿﻿
Are you wondering how Liverpool reached both domestic Cup Finals despite an appalling league season? It's Gerrard, Carragher and Kuyt's ability to win individual matches over 90 minutes.
Manchester United may be short of European aspiration, but how much has Fergie had to rely on Ryan Giggs and the returning Paul Scholes to see off the Noisy Neighbours in the title race? I'd say a lot.
﻿
﻿Arsenal looked decidedly one-dimensional before the deadline arrivals of Yossi Benayoun and Mikel Arteta, but it's carried them through a turbulent season to finish strongly. Arsene Wenger suspended his principles in the transfer market to bring in that vital ingredient that can only be gathered by years in the game.

This has been a season where the oldies have been decisive. Maybe Alan Hansen's famed "win nothing with kids" comment was made sixteen years too early.
by Soccermongery's Jonny Gould on Thursday, April 19, 2012 No comments:

Managing players the critical difference between Fergie and Mancini

As Manchester City's title bid choked at Arsenal, it was perhaps inevitable that the headlines should be made by one of their players - rather than one from the victorious Gunners.

Mario Balotelli's disgraceful lack of self-discipline ended in a last-minute red card and left City boss Roberto Mancini pondering whether to play him ever again and to ditch him in the summer. 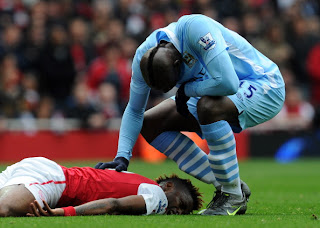 Teammates Joe Hart and Vincent Kompany were seething as they left the pitch after defeat. Oh to be a fly on the wall in the City dressing room afterwards.

But the truth is Balotelli shouldn't have been on the park anyway: the boss should've subbed him at halftime. And therein lies the key difference between Mancini and his managerial title rival, Sir Alex Ferguson at Manchester United.

Fergie realises the overriding truth that players lose managers their jobs. Imagine Balotelli at United? Not once the Govanator had taken advice from one of the Italian's former bosses at Inter, Jose Mourinho. The Special One sold him to City.

Mancini has shown exceptional patience with both Balotelli and Carlos Tevez and his loyalty's not been rewarded. Fergie's demonstrated time and again that if he's crossed, it's curtains at Old Trafford. 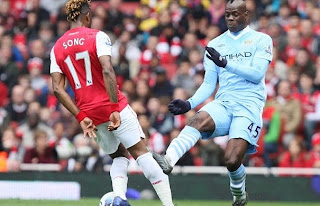 Because the noxious cloud of Balotelli's show enveloped that other miscreant star of the Mancini regime who was also playing. Tevez was so key to City last season and but for six months of tabloid tantrums and AWOL's may well have pushed City over the title line at the expense of United this campaign.

City have splashed out millions on their squad but there's no substitute for experience, continuity and management. Brian Marwood, the conduit between players and the board, revealed the City strategy: win a first title, then invest in youth from there.

It's foundering and largely because Mancini hasn't been ruthless enough with the ill-disciplined elements of his squad.
by Soccermongery's Jonny Gould on Monday, April 09, 2012 No comments:

Next Chelsea boss? It's got to be Roby!

The identity of Chelsea's next boss is staring out under the noses of the billionaire Russian and his tubby apparatchiks. Roberto Di Matteo's lifted the team out of lethargy to the outer perimeter of glory - and he'd be my choice for the hotseat.
Yet Roman Abramovich always opts for the coach with the prevailing wind of hype under his wings - and what does he do with this hot air? He acts on it. Granted the Siberian got it spectacularly right with Jose Mourinho and Carlo Ancelotti (and hopelessly wrong when he sacked them both) - but what of the rest?
Grandad Scolari was hired merely because he put England to the sword thrice with Brazil and Portugal. His command of English made Fabio Capello sound like Brian Blessed. Ray Wilkins fronted the media for most of his tenure and when the former Kuwait chief did plop out a few words, he'd not bothered to find out how Chelsea was pronounced!
﻿
﻿﻿But quarter-English Baron Villas-Boas, with a full eighteen months management under his belt (fresh from a league and Europa double with Porto), got the nodski because his youth and career path resembled that of the Special One.

Could Roman make the same mistake again and launch an audacious bid for Pep Guardiola and his like? If so, then taking the Barca boss out of his comfort zone offers no guarantee of Champions League glory down Fulham Broadway anytime soon.
﻿
No, Chelsea must appoint Roberto Di Matteo. Iconic scorer of famous Blues goals as a player, he's clearly a man who cares not just for the club but also for the playing group too. Recall his riproaring celebration at the final whistle of Chelsea's Champions League triumph over Napoli. He nearly decapitated Fernando Torres as he sauntered off the pitch, jumping on the Spaniard's back like he was playing the joker in It's a Knockout.

He even got a bear hug from Frank Lampard, a clinch not employed since proposing to Christine Bleakley in the summer.
"Sacked mid-season at West Bromwich Albion!", I hear the cries. That counts for little. The spin should be that he has managed in the Premier League more to the point.
And remember, Rafa Benitez was sacked by Real Valladolid and Osasuna before tasting European success at Valencia and Liverpool. Alex Ferguson was dismissed by St. Mirren in his second job. Whatever happened to him?

Di Matteo's not ruling himself either, although sensibly he only wants to talk about "winning games in a results business". A down-to-earth approach that puts him in good stead for getting the job permanently.
Di Matteo's also played recently. He has the respect of the senior players and critically, they play for him. The Chelsea board need to apply completely different criterion and one of them is to get off their high-horse and stop buying the equivalents of a Rolex Daytona.

Think Swatch, Roman! Give it to a man who'd live and breathe Chelsea. Give it to Roby.

Also on Soccermongery: Villas-Boas chewed and spat out by Chelsea and John Terry court verdict will prove a snapshot of our society's health.
Click here for the current Top Story Soccermongery's all about your feedback, so write away, right away!
by Soccermongery's Jonny Gould on Wednesday, April 04, 2012 No comments:

Liverpool FC: a Comolli of errors

There's no doubt Kenny Dalglish is relying on his legendary status to remain as Liverpool manager at the moment.
Here was a man in his first year as player-boss who claimed the Reds the double, clinching the league at Chelsea and scoring the winner. Real Roy of the Rovers stuff from one of Britain's greatest ever players.
And of his second coming amid the dying embers of the Gillett, Hicks and Roy Hodgson gloom, which Kopite wouldn't have called for the Messiah back then?
But how long can King Kenny's credit last? Six defeats in seven games has left the summer's big spenders out of Europe and out of touch of the big sides. Liverpool FC a big brand? Yes. A big club? Measured against the new arrivals at football's top table in the form of Tottenham and Manchester City? it's highly questionable.
During the latest defeat at Newcastle, I was surprised to see Steven Gerrard shoeing Dalglish off the pitch in a "stop interfering" kind of way. Gerrard is about the only one at Anfield with the status to do such a impudent thing to the gaffer - and it was telling.
But the blame for Liverpool's plight can't entirely be placed at Dalglish's door. It's transfer policy which has been a major let-down too - and that's squarely the responsibility of Damien Comolli.
Jordan Henderson, Charlie Adam, Stewart Downing and Andy Carroll have yielded just six goals between them. The quartet cost owner John W. Henry an eye-watering eighty million quid in the summer.
They're all British too. Now, I'm not battering the reputations of home-grown players. Indeed, the English backbone of Chelsea and Manchester United has served them rather well over the years. But the contention of building a new team from the British Isles is misguided when as a Premier League club, one can attract the best of the world.
It's just not true that British players settle in better or faster. A high-level professional from Togo or Tel Aviv is just as reliable. But Comolli seems to think so.

Without qualifying for the Champions League, the best players, whatever their nationality won't be Anfield-bound anymore. Without them, Liverpool will become Premier League also-rans. Despite splashing out in the summer, that's what they've become this year.

As with other victorious Carling Cup managers, trophy glory doesn't guarantee job security and sometimes it's the straw that breaks the back of relegation.

Let's not forget Juande Ramos has still won one more piece of silverware at White Hart Lane than Harry Redknapp, but the Spaniard was taken out in a midnight cloak and dagger exit months later.

Alex McLeish steered Birmingham City to the League Cup last year - but at huge cost to the Second City's Second Club, as they were relegated. Next thing you know, it was out of the frying pan and into the fire for Big Eck when Aston Villa came calling.

So it's a results business whether you're Liverpool legend Kenny Dalglish, former Spurs boss Glenn Hoddle or Newcastle's Kevin Keegan (twice). And if things don't turnaround fast, I can see the passwords to the Liverpool bank account reset for a new manager this summer. Kenny's got to be the on the edge.

But it's not just players that lose managers their jobs these days. It's Directors of Football too.