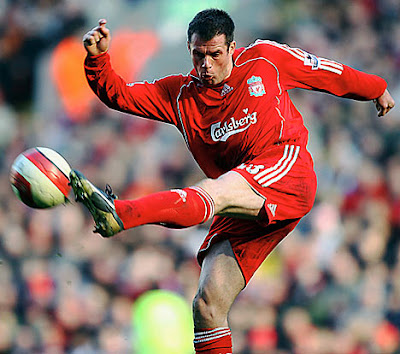 Watching Liverpool's Jamie Carragher appear as a Sky Sports summariser during Manchester United's 3-nil Premier League win over Chelsea was a bit of a wind-up... so I thought I'd pick this one out of the Soccermongery onion bag - the day Carra* was wound-up himself.
And oooh, didn't he take the bait with this! Have a listen to this podcast gold. From nowhere, Carragher phoned up talkSPORT Radio to respond to presenter Adrian Durham's allegations that he was a bottler.
*for maximum listening pleasure, say Carra in a Liverpudlian accent during download. Go on, try it.... Jarreh, Jarreh (note the J as in the Spanish, Javier). No wonder Rafa enjoys speaking English. His ajj-cent is well-equipped to deal with the rigours and contours of Stanley Parj banter, no?
This was an example of pressure getting to players where reputation is questioned all the time. But ultimately, aren't football matches won on the field of play ... not in the mind?
Soccermongery's all about your feedback, so write away, right away!
Also on-site: Has Rafa delivered another Luv It, Luv It moment? plus video: Steve McClaren attracts a mystery Dutch accent!
by Soccermongery's Jonny Gould on Monday, January 12, 2009