Has Rafa delivered an "I Would Luv It, Luv It" moment?

Liverpool manager Rafa Benitez has launched an astonishing attack on Sir Alex Ferguson, by claiming he's above punishment from the game's governing bodies. The Spaniard says Ferguson is the only manager who is not be reprimanded for outspoken attacks on referees and officials

"We had a Respect campaign meeting and I said forget it, because Mr Ferguson is killing the referees," said Benitez.
He was responding to Ferguson's midweek comment that nerves might ruin Liverpool's title bid, before issuing his tirade against the United boss. Fergie's reply was issued after his team's crushing victory over Chelsea the following Sunday. Some would say Fergie's team did all the talking - but he still branded Rafa angry and distressed.
Rafa's extraordinary outburst came after a journalist asked him for his response to Fergie's suggesting that Premier League leaders Liverpool might get nervous in the run-in.
"I was surprised by what has been said, but maybe they (Manchester United) are nervous because we are at the top of the table," added Benitez.
The Spaniard then pulled out a sheet of paper and read out a list of accusations about Fergie's conduct regarding referees, the FA's Respect campaign and fixture lists. "I want to talk about facts," said Benitez. "I want to be clear, I do not want to play mind games too early, although they seem to want to start.
"During the Respect campaign - and this is a fact - Mr Ferguson was charged by the FA for improper conduct after comments made about Martin Atkinson and Keith Hackett.
"He was not punished. He is the only manager in the league that cannot be punished for these things.
"How can you talk about the Respect campaign and yet criticise the refe 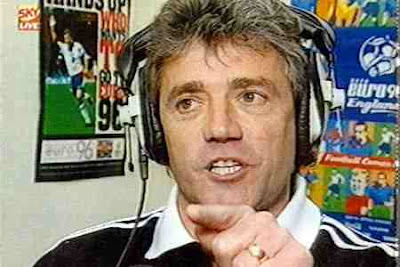 ree every single week?
"We know what happens every time we go to Old Trafford and the United staff. They are always going man-to-man with the referees, especially at half-time when they walk close to the referees and they are talking and talking.
"All managers need to know is that only Mr Ferguson can talk about the fixtures, can talk about referees - and nothing happens.
"We need to know that I am talking about facts, not my impression. There are things that everyone can see every single week.
"To complain and to always have an advantage is not fair."
Benitez also heavily criticised Ferguson's complaints over supposed favouritism over fixtures. "Two years ago we had a lot of early kick-offs away on Saturdays when United were playing on Sundays. And we didn't say anything," said the Reds boss.
"Now he is complaining about everything, that everybody is against United. But the second half of the season will see them playing at home against all the teams at the top of the table, it is a fantastic advantage.
"If he wants to talk about fixtures, and have a level playing field, there are two options if we don't want more problems with fixtures.
"One is the same as in Spain, the draw for the first part of the league is known, everyone knows which weekend. In the second half everyone plays the opposite, so you all know.
"Or there is another option. That Mr Ferguson organises the fixtures in his office and sends it to us and everyone will know and cannot complain. That is simple."
It's crafty and timely from Rafa, coming as it does before United's six-pointer at home to Chelsea. It was calculated and pre-meditated as opposed to Super Kev's spectacular loss of cool in 1996.
But whatever happens between these two - and whatever charges are brought (or not) against Rafa, this title race will be won on the field of play. Fergie might be allowed a little chuckle to himself about this.
Also on Soccermongery: January Transfer Window Comment and Podcast Laugh: Jose Mourinho sings the Blues plus Video: Steve McClaren's mystery Dutch accent interview!
Soccermongery's all about your feedback, so write away, right away!
by Soccermongery's Jonny Gould on Saturday, January 10, 2009