England's ordinary display is no indication of our World Cup prospects

England were far from brilliant in beating Mexico in their final Wembley warm-up before the World Cup Finals. But without Chelsea's "weary" Cup Final players (a game played nine days ago!) it wasn't a first-choice line-up either.

Still, Peter Crouch added to his impressive tally: 21 goals in 38 international appearances and Wayne Rooney came out unscathed as did the rest of the squad. It was one of Crouch's comedy goals which the referee generously allowed as he appeared to bundle it over the line with his arm. 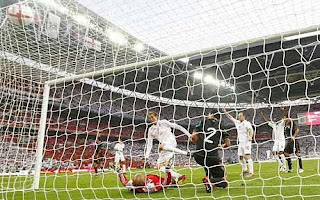 It was good to see both Ledley King and Glen Johnson score. It's important we can rely on goals from all over the park; a need magnified by Rooney's diminishing England strike rate.
He's scored just once in his last seven having hit ten in the previous seven.

King's header disguised a rather below-par performance. He was frequently left standing by his Spurs teammate, Dos Santos in Mexico's attack. But Johnson's goal was a peach; his rising left-foot drive from outside the area was more than enough to earn him Man Of The Match when in fact no one really deserved it.
Even a West Ham player scored. Guillermo Franco took advantage of some sloppy England defending - followed by a most surreal celebration from the Mexican fans, delayed because of their viewing angle to the action at the other end of the stadium.
Two seconds later - uproaorious celebration. Good news travels fast!


Adam Johnson came off the bench for his full England debut. An old-fashioned dribbler, he looks set to be Fabio Capello's wildcard - and a substantial one at that. Jamie Carragher was comfortable if untested on his return to the fold as was Joe Hart, who caught everything with confidence. Opportunities seem to opening up for him at both club and country level. Milner joins Crouch and Baines on the plane and I'd pick Walcott too. Despite struggling with his form, he's a player capable of greatness. It's just all ahead of him!
But despite the slack passing, England had plenty in terms of invention and match fitness - and we're as ready as we're ever going to be to take on the rest of the world in South Africa.


Click here: Avram Grant: football's most celebrated loser. Soccermongery's all about your feedback, so write away, right away!
by Soccermongery's Jonny Gould on Tuesday, May 25, 2010