Michael Owen's top level of career is over

Michael Owen's cameo in the Carling Cup Final encapsulated his whole career in just 42 minutes. He scored a vital goal on the biggest stage, he took the chance in front of England coach Fabio Capello - and then pulled up with a hamstring injury and was withdrawn before half time. 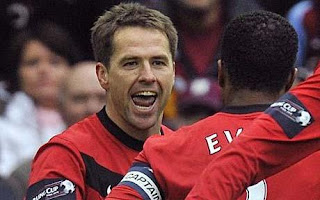 It rules him out for the rest of the season so extinguishing any flickering hope he might make the squad for the World Cup Finals.
But with another year left on his contract at Old Trafford, Sir Alex Ferguson says Owen will be at United next season. He's praised the former England striker as sharp in training and good around the dressing room.

And Owen's "loved every minute" at United, scoring nine goals in all competitions despite only starting eleven times. Despite a catalogue of injuries the 30-year-old still knows where the goal is. 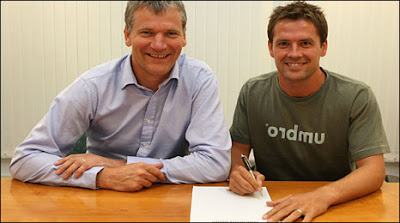 And true to his reputation for keeping the coolest head in the biggest cauldron, Owen's memorable strike in Fergietime against Manchester City together with his Wembley swansong  proved he's never lost it.
He says he's determined to return to peak physical condition for the start of next season - and he probably will. But that won't stop an old injury resurfacing. For a man who's hit 40 goals in 89 international appearances, his hamstring signals a miserable autumn to his career. 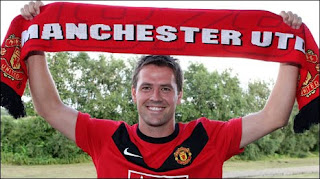 So he'll struggle through another season at United. A bit part player in a successful side. His role will be even further diminished as Fergie will surely raid the transfer market looking to bolster a thin looking frontline led by Rooney, Berbatov and the thoroughly unconvincing Diouf.
Even so, he'll still probably come off the bench to beat United's nearest title rival next season!

Owen's developing interests beyond football - particularly in horseracing. He seems at peace with himself. It's just a shame for the rest of us Owen fans that his physicality doesn't match his undoubted goalscoring talent.
Click here for the current Top Story
Soccermongery's all about your feedback, so write away, right away!
by Soccermongery's Jonny Gould on Sunday, March 07, 2010