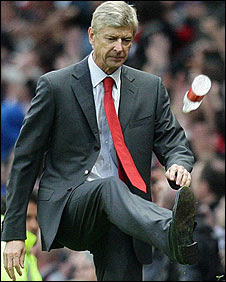 "That Arsene Wenger? he's a genius, mate! He doesn't resort to splashing the cash. He patiently cultivates his international teenagers into twentysomething worldbeaters!".
And his plan certainly stacks up. Arsenal are the big four's only financially viable club who are otherwise saddled with unmanageable debt or funded as a billionaire plaything. Arsenal's £250million overdraft is Good Debt. It's attached to the building cost of The Emirates, which incidentally generates the biggest matchday revenue in the world.
Yes, Wenger and his board visualise a few seasons as also-rans behind Chelsea, Manchester United and the European giants but soon, they'll inherit the world! 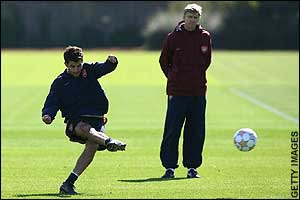 But there's one major, major, (major) design fault to the Professor's Grand Plan.
The man Wenger wants to build his team around is a Catalan who dreams one day of returning home to his one and only. Of course, I talk of Cesc Fabregas and Barcelona.
How can Wenger plan around a player who WILL leave the Gunners in six months, two years or some other undefined time?

Speaking in the aftermath of Arsenal’s hard-fought 1-nil win over Liverpool, the Alsatian coach responded to media questions on the transfer speculation with his usual wit:
“Nothing plus nothing, is nothing,” he stated after he was informed of the denial issued by the Barcelona hierarchy.

Wenger holds the 23-year-old star in the highest esteem: "Cesc's vision is comparable to Michel Platini's. It's a compliment but Cesc has it all in front of him, but he has a vision.

"He will still develop. I remember Platini was more of a striker and Cesc is more of a midfielder. He is adding that element to his game, but Platini had more of a striker's mentality. He could stay quiet for a game, then think, 'I will score a goal'. Cesc is a guy who likes to be at the heart of things."

But Fabregas, who's issued a fresh denial about leaving Arsenal, has said in the past he'd like to play for Barcelona some day. It would be a way of Camp Nou nullifying the error of losing their youngster as a teenager to Wenger and Arsenal. It's rumoured Arsenal capitalised on the power vacuum at FCB during the last presidential elections.

You can never say that a single player is bigger than the team, but as Wenger's experienced before, losing big players plots the team's progress backwards. How ironic would it be if Fabregas returned to Barcelona as part of an electoral promise - by Joan Laporta!

At Arsenal where the ethic is: if the first-team is successful, then the rest of the club's success stems from there, Wenger needs to adopt a Plan B - and go into the transfer market.