Wenger's not retiring. In his shoes would you? 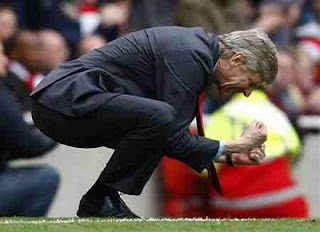 The highly-strung Professor Genius, who's cluster of teenagers weave pretty patterns without winning silverware, concedes life without football would be inconceivable for him.

Do you remember when Sir Alex Ferguson announced his retirement as Manchester United boss? That was EIGHT years ago! Since then, United have won another Champions League and a hat-trick of titles. Even Fergie's Fledgelings, Gary Neville, Paul Scholes and Ryan Giggs remain key United figures - in their mid-thirties.

If you look at how Fergie jigged along the touchline as United edged City last Sunday, retirement must be as far away in his mind as ever. The Gunners chief is going to be around for a while too. He once said he'd stop at 50. Now the Alsatian's barking another tune.

"I don't believe in retiring unless you have to. I have never had a day when I think I could live without football. I know one day it will happen but you shouldn't live every day knowing you are going to die - you live knowing that you want to live."

Wenger went on to point out that other people will let him know when to call it a day: "In our job you need physical strength and to be a bit of an animal to convince people it's important to win.

"But once that physical strength goes it's a handicap, although you can compensate to an extent with experience.

"It's not for a manager to know - it's for other people to know and to tell him."

Wenger still classes going the whole season unbeaten in 2003/04 as his lasting legacy in football.

"Without a doubt going the whole season unbeaten is my greatest achievement. If you win the championship you feel someone else can come in and do better than you.

"It was always my dream to go the whole season unbeaten because there's not much more anyone can do to beat that."

Football is a constant challenge for top managers, the strategy keeps their minds active and goal celebrations must the best possible feelgood buzz. Even Sam Allardyce's setback at Newcastle couldn't keep him down. Blackburn Rovers are the beneficiary of his desire and will to win.

Despite years of success at Arsenal, Wenger's job is far from done.