By JOE MORRIS
In his second Soccermongery article, Joe recounts Manchester United's love affair with the Cup. I can't entirely forgive United for shunning the world's greatest cup competition in 2000 opting instead for the World Club Pot, but the FA Cup is experiencing a renaissance and United's cup bids now reflect the tournament's grandeur.
If the FA Cup is the most romantic competition in the world, then S 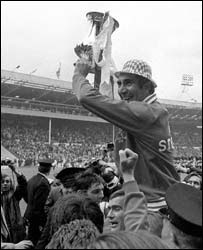 tanley Matthews and Ian Porterfield would have been chocolates and flowers men. Both Matthews and Porterfield were the knights in shining armour and the Cup will be eternally indebted to them.
In 1953, a couple of weeks before the Coronation, a spindly-legged wing wizard called Matthews twisted the Bolton defence in knots. He swayed. shimmied, shuffled and finally bamboozled a Bolton side who seemed to have the match under their belt. Matthews was tricky, deceitful and by the time Stanley had finished with them, Bolton were glad to see the back of him. Matthews, backed by a willing nation, won the Cup for Blackpool.
Exactly 20 years later a long-haired lad named Ian Porterfield brought the old Second Division underdogs Sunderland to an ecstatic standstill when Bob Stokoe's red and white striped army lifted the Cup. From a perfect Bobby Kerr corner, the gangling Porterfield loped up from the back, trapped the ball with the skill of an acrobat on his knee, and thumped the ball ferociously past the Leeds United keeper David Harvey.
The FA Cup has never been short of defining moments: there was Ricky Villa hip swivelling past a stunned Manchester City defence, just one of Spurs' three winning goals in the 1981 Cup Final. Poor Leeds United had no answer to a Ray Crawford inspired Colchester during the early 1970s. Ronny Radford, shirt hanging out of his shorts, slid over the mud of Edgar Street to snatch an equaliser for Hereford against a well-organised Newcastle.
Allegedly the FA Cup has lost some of its popularity but you could say much the same about ten pin bowling. The Cup will never lose i 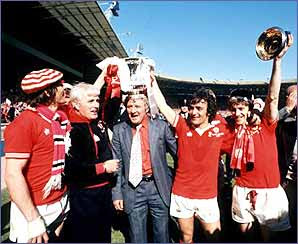 ts essential worldwide appeal, and three years ago produced perhaps its most spellbinding Final for years. The match had so many fascinating twists and turns that Liverpool and West Ham seemed to take the game to its loftiest level.
Throughout their illustrious history, Manchester United and the FA Cup have almost been inseparable. The Cup took on a whole emotional resonance when United were beaten by Bolton in 1958. This was the year when the delectable Busby Babes were tragically taken from us on a snowy Munich airfield.
In 1963 Matt Busby stuck the proverbial two fingers up against the world when his newly re-modelled United team ran rings around Leicester City. It took another 14 years before the cheeky and extrovert Tommy Docherty convinced Lou Macari, Sammy McIlroy, Steve Coppell and Stuart Pearson could overpower an exceptionally intelligent Liverpool side with Double-winning designs.
During the 1980s Ron Atkinson's United flounced and swaggered their way to Cup Final victories against Everton and Brighton respectively. United, it seemed, had a lease and mortgage on the FA Cup. There was Ray Wilkins, a player who brought dignity and stateliness to United's midfield, Norman Whiteside, one of the youngest players to appear in 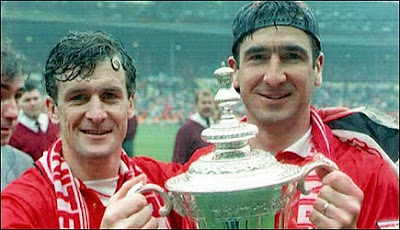 a Cup Final who had the most ravenous appetite for the game.
At the beginning of the 1990s Sir Alex Ferguson added yet more ornaments to United's well decorated trophy cabinet. United finally overwhelmed a dogged and obstinate Crystal Palace side. Half way through the decade a showman and exhibitionist called Eric Cantona took on Liverpool almost single-handedly and then scored the winning goal through a forest of Liverpool legs. Chelsea were also unravelled by United with the kind of performance that bordered on the spectacular.
In their 2-1 defeat of Spurs on Sunday, United once again stepped up to the plate with a display of craft and delicacy. touch and perception. It lacked some of United's traditional silks and satins but there was an unmistakable buzz about Old Trafford that sent a shiver down the spine.
Michael Carrick. via West Ham and Spurs, is beginning to look the most controlled midfield player in the country, Paul Scholes looked like a master of his trade and Danny We 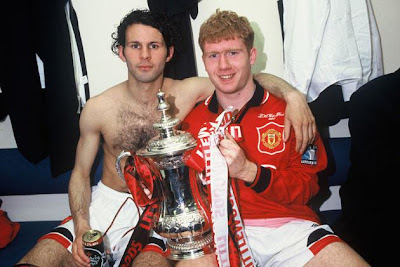 lbeck, although leggy, strolls and then strokes the ball with languid arrogance. Dimitar Berbatov could yet become one of United's most prized finishers.
Then of course there is a young Portuguese winger with matinee idol looks. Cristiano Ronaldo and the FA Cup were somehow meant for each other. Ronaldo, World Footballer of the Year is now wanted by more or less every club on Planet Earth - and with every justification.
Ronaldo went through the familiar routine against a Spurs team with too much on their mind. There were the bewildering stepovers and dragbacks that are turning into his stock in trade. At one point Spurs were being pulled in two different directions. So the bricklayers and carpen 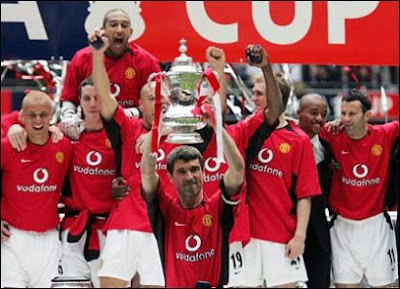 ters of the non League take their leave of the FA Cup. Little Kettering of the Blue Square Premier are out of the Cup and the rest of the big boys will fight it out for a day at Wembley.
But for Manchester United the love affair with the FA Cup may never fade. Their courtship with this famous Cup will remain a passionate one. For as long perhaps as time itself and football.
Also on Soccermongery: Jonny's TV Guide to watching Football on TV... er... nil-nil, Jeff!
Soccermongery's all about your feedback, so write away, right away!
by Soccermongery's Jonny Gould on Thursday, January 29, 2009