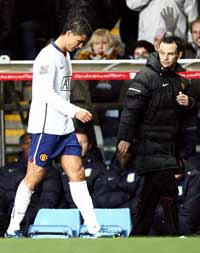 As Cristiano Ronaldo limbers up to garner every world player gong around, the manner of his display coupled with his sheer desire to face Villareal in the Champions League suggests he's about to unleash himself again.

It's been a truncated term so far for Ronaldo; the weight of expectation on his shoulders has proved unforgiving of his recovery from surgery and his summer job for Portugal.
So allegations that his head's already in Madrid have been far too easy for the pundits to make.
Euro 2008 offered no respite followed up by frustrating months recovering from an ankle operation. Comparing his first dozen outings to The Season? well, it's plain short-sighted.
Ronaldo's feats in scoring 42 goals, winning the Premier League, the Champions League and the Golden Boot is a tough act to follow. But he will. Don't believe me? Ask Fernando Torres.
"What he did last season is incredible. No-one can rival him," the Spaniard told France Football. "He is in a class of his own. For me he is the best player in the world. A machine. Incomparable." gushed the Liverpool hitman.

His superhuman show last term simply created a rod for his back but reports of his United demise are as overstated as the Brown Bounce.
His desire to feature at Villareal after limping out of Saturday's stalemate at Villa is a measure not just of his character - but a sign of an inate confidence that he's working his season back into gear.
Ron played with trademark courage, targeted as he was by the home team and their fans, a victim of a drastic foul by Capdevila which deserved the straight red.
His body language, the straight-arched back after his half-volley was deflected against the crossbar revealed all: Ronaldo's humming toward to the top of his game and he knows it.
He ran a bit of temperature on Wednesday night, but who better than Sir Alex Ferguson to channel that fire in his belly to more positive ends as the race for honours intensifies?
Wheeling round the world snaffling up badges every 10 days in James Bond Bib and Tucker will also aid his feeling of well being too.
You watch: Ronaldo's back - and back for United. Madrid will have to wait.
by Soccermongery's Jonny Gould on Thursday, November 27, 2008